Silvo’s path took him from the romantic, analog 1970s to the fast-paced, digital life of the new millennium, from the rural countryside to brutal Patagonian storms, endless Himalayan expanses, Karakoram granite spires soaring into the sky, Indian monsoons, vertical big walls of Yosemite, and the beautiful Julian Alps. He was a member of the rock and roll generation that brought energy and rhythm onto mountain faces. Commitment, boldness, enthusiasm, and an honest friendship produced the Three Musketeers: Franček Knez, Janez Jeglič, and Silvo Karo. The big walls of Fitz Roy, Cerro Torre, Torre Egger, and Bhagirathi were the milestones of his career, which included Himalayan giants as well as 8a sport climbing. He followed the trends of cutting edge alpinism and developed a strong affinity for climbing light and fast. His essay Patagonia: Terra Mystica was published in Voices from the Summit (2000). The film Cerro Torre South Face won the Best Mountaineering Film award at the 1989 Trento festival. His love for film eventually led to the Festival gorniškega filma (Mountain Film Festival), which he started in 2007. He’s been a member of the French Groupe de Haute Montagne since 1991, became an honorary member of the Alpine Club from Great Britain in 2010, and was awarded the Order of Merit by Slovenia’s president. 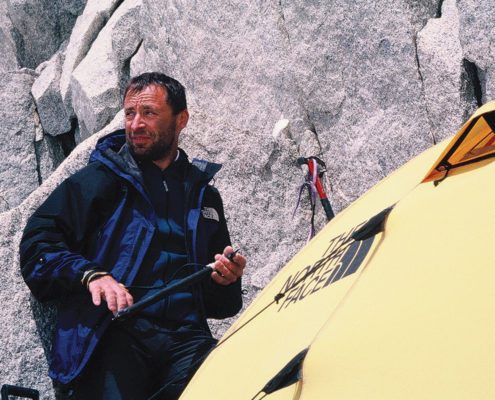 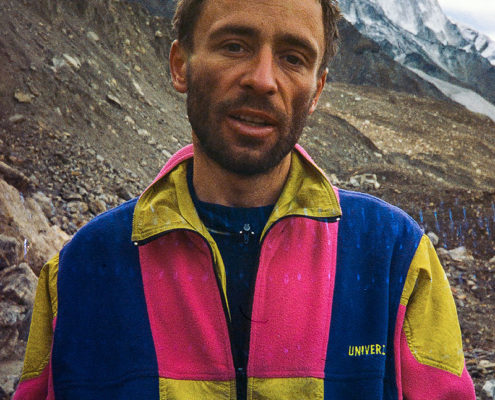 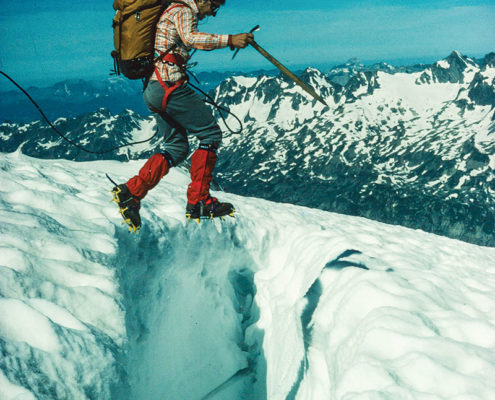 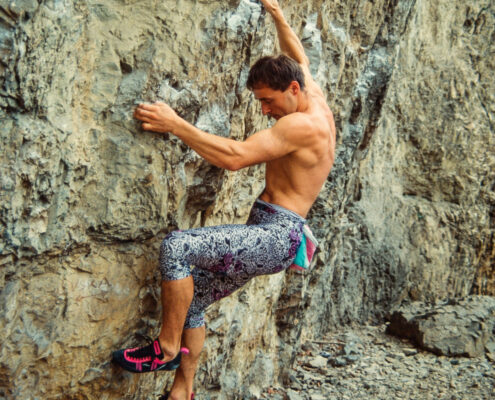 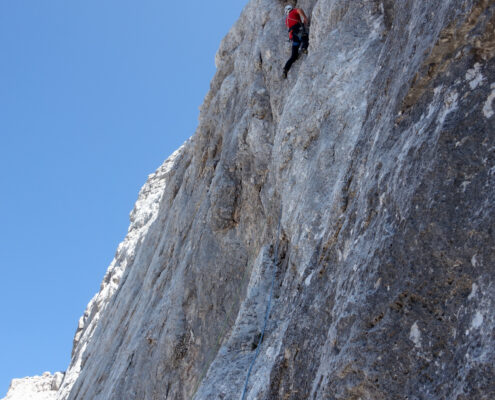 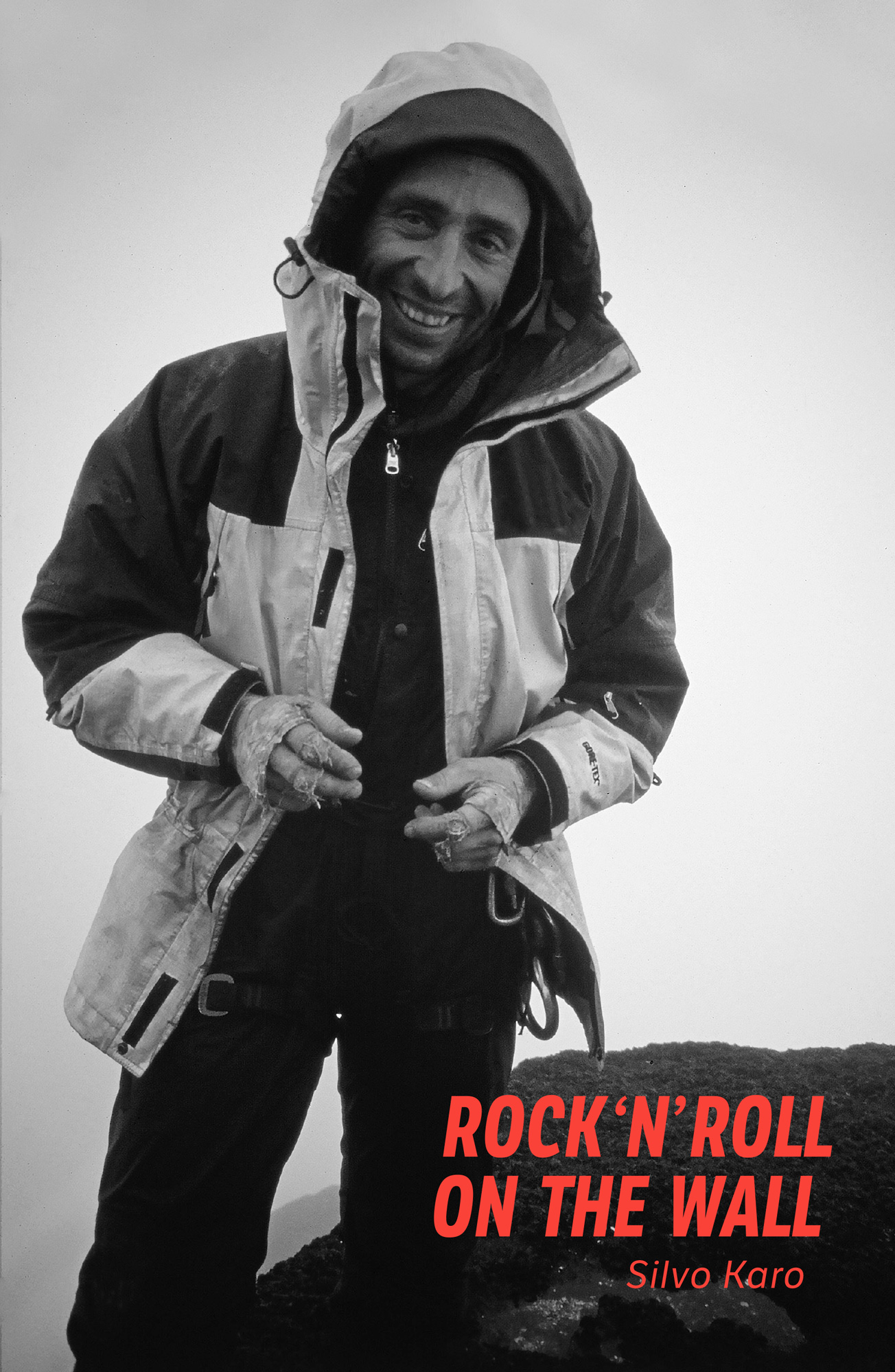 Rock ’n’ Roll on the Wall

Rock ‘n’ Roll on the Wall – a long-awaited autobiography of the protagonist of the golden age of Slovenian mountaineering, led by the call of the mountains from the rural countryside to brutal Patagonian storms, vast Himalayan heights, radiant chimneys of the Karakorum granite, the Greenland horizon, Indian monsoon, the Julian Alps, and Yosemite precipices. His mountaineering career was most marked by the great walls of Fitz Roy, Cerro Torre, Torre Egger, and Bhagirathi and the dedication, audacity, zeal, and sincere friendship that gave birth to the alliance of three musketeers – Silvo Karo, Franček Knez, and Janez Jeglič – Johan.

“Silvo Karo. The very name strikes a silent dread into most of the world’s serious climbers. How can a mere man climb these things? The West Face of Bhagirathi III… The Devils Dihedral on Fitzroy… Both the Directissime de l’Enfer and the South Face of Cerro Torre have gone down in folklore as some of the world’s most treacherous walls. Indeed all are still unrepeated after over thirty years! This is no simple auto-biography: this is the story of a survivor who has brought back something precious from the other side.”

“You wonder how Silvo Karo has done so much, how he’s survived, and what it was like to evolve through such incomprehensible intensity. Yet you meet him and he’s quiet, calm, stoic. One evening after some casual sport climbing, our
conversation drifted and Silvo began telling stories from the golden age of Slovenian alpinism – a time yet to be eclipsed. I sat, rapt, as if I were listening to Moses recount the days of the tablets. This is the book we’ve been waiting for, one that brings to life an era and a group of people who still evoke much-deserved awe, as told by one of the masters.”

“This long-awaited memoir from Silvo Karo is a welcome addition to the rich tradition of Slovenian climbing literature. His spectacular and uncompromising performances on vertical terrain are beautifully balanced by his refreshingly modest nature and his light-hearted style.”

“Silvo has always kept up with the times and was eager to share his experiences with the younger generations. This book will give an even wider circle of up-and coming alpinists a chance to experience some of the old alpinist wisdom (or is it madness?) and incorporate it into their own climbing.”

“Not just another mediocre climber writing about a walk up Mt. Everest, Silvo Karo is one of the true heroes of modern alpine climbing, and these are the stories of some of the most difficult mountain faces ever climbed.”

“A book with the biggest number of legendary stories from what was probably the most productive period of Slovenian alpinism, which continues to be a major source of inspiration for me.”

“Through the images of walls one catches a glimpse of nine lives.”

By visiting and using the website, you agree to the use and recording of cookies.
Scroll to top